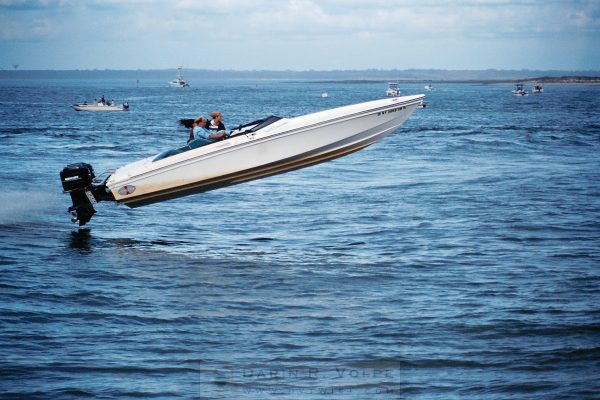 It was the early 1990s and I was visiting Long Island, New York. I was at the shoreline looking enjoying the views of the harbor when I caught sight of this powerboat jumping waves. I shot photos as it circled the harbor a dozen or so times, leaping out of the water and flying over over the choppy sea. After several passes the boat headed back in to the port, but the driver must have seen me taking photos. After he was done playing on the waves he found me on the shoreline and offered to buy a photo from me if I had a good one.

There is no LCD on the back of a 1977 vintage 35mm film camera, so I got his contact information and returned to my brother’s house just outside of Philadelphia, Pennsylvania. I took the film to a local lab for developing and hoped that I’d have a good slide. When I saw this shot I sent the slide off to a custom lab in San Francisco and had a 20″x30″ poster made from the slide. I and was rewarded with a check from the boat owner for $125, making this my very first sale.