I shot this photo of the Margarita Mercantile in Santa Margarita, California. This is one of my favorites, and the story that goes with it is even better. 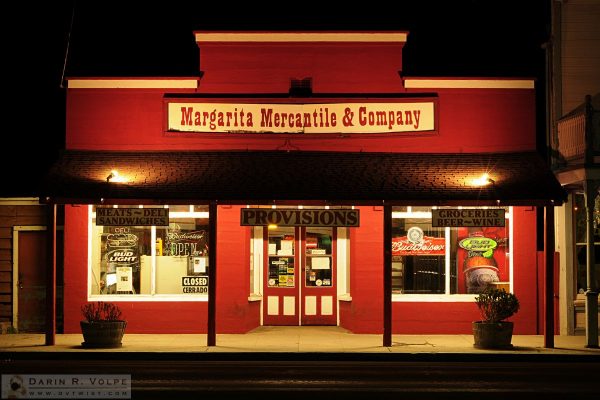 So there I was, minding my own business taking photos of a freshly painted store at 10:30pm on a Thursday night when a car pulls up and parks right in front of the store. The driver starts talking on his cell phone, and I’m thinking “Great, of all the places to stop to talk on a cell phone, right in front of the store I’m photographing.” Soon he and his companion get out of the car and start talking among themselves, occasionally shooting glances my way from across the street. I decide I should go and go say hello.

The guy asks me what I’m doing. I tell him I’m taking pictures of this beautiful store. He says that it’s his store, and that me photographing it is “just odd”. He comes over to me and starts yelling at me for being there in the middle of the night and taking pictures of his store without permission. Now, if you want to get me mad all you have to do is tell me I can’t take a picture from a public street. I tell him that I can take pictures of whatever I want when in public and don’t need anybody’s permission. He continues to tell me that this is just too weird, and he walks behind my car and takes a photo of the license plate. So I tell him (rather loudly and angrily, as that’s where the conversation has gone) “Haven’t you ever heard of art?” to which he says, “This isn’t art. Art is…” and makes painting motions with his hand.

Next he tells me that he’s going to call the cops. I’m all for this and I tell him to do it, I’d be happy to wait for them. He goes back across the street and inside the liquor store which is next door, and which he also owns, and comes out with the lady working there. Meanwhile I’m yelling across the street, asking if he’s called the cops yet because I’m waiting for them.

He comes back over, tells me that his employee says I was there two nights ago, and demands to know why. I tell him that I had to come back and move his garbage can and magazine rack because they were in the shot from the other night, one of his Bud Light signs was turned on and distracting, and I really wasn’t happy with the photo (small image on right.) He tells me how weird I am, checks out my camera (on a tripod, set up across the street pointing at his store,) and asks me “If you are taking pictures then why is the lens cap on?” I held back from saying “Because when some idiot parked in my way I didn’t want the lens to get dusty while waiting for him to move, you moron!!!” He continued to say I was weird (he said that about half a dozen times) and couldn’t understand why I’d be taking pictures of a store so late at night. I finally yelled “It’s your building – LOOK AT IT!!!” But no matter what I said, he just couldn’t figure out why I was there.

Eventually he went back across the street again. I decided to go try and deescalate the situation and followed him, saying, “Hey, I think we both overreacted here.” I gave him my card, and I put his garbage can and magazine rack back where they were. Then I left for the night.

The funny part is that about 15 minutes before he showed up, the director of the local historical society pulled up behind me as I was setting up, commented on how good the building looked, and asked if I’d give her a photo for their website if it came out nice. So when I got home I emailed her a small copy of the picture and told her that I’d love to give here a print, but after the run-in with the owner I don’t feel right giving her a picture of his building.

So she said he would talk to him and emailed me back in a couple of days that he apologized and was paranoid because the store has been broken into a couple of times. So I ran off two nice 13-inch prints, one for the historical society and one for him, and dropped them off at a few days later. The owner wasn’t in the store, but his employee phoned him so he could talk to me. He apologized profusely and thanked me for giving him a picture because “You’re right – you are an artist!”

I’ve been taking photos for years, but that’s the night that I decided that I really am an artist.