A View of the Rock

Morro Bay is a small fishing community located on the Pacific ocean half way between San Francisco and Los Angeles. It’s probably best known for it’s landmark volcanic cone, Morro Rock, at the harbor entrance and perhaps only slightly less known for the three tall stacks of the old power plant at the harbor’s edge.

Morro Rock is a 581-foot high volcanic plug, the hardened remnants of  magma that was inside a volcano over 20 million years ago. Over time the rest of the volcano eroded away leaving the relatively tiny Morro Rock behind. The Rock is considered sacred by the local Native Americans, although the Chumash and Salinan tribes dispute which one has claim to the Rock itself. The Salinans are allowed to climb Morro Rock for their solstice ceremonies, but the Chumash believe it too sacred to ever be climbed. Climbing by the general public is forbidden due to the danger of falling or getting stuck (which still happens occasionally anyway and tends to require a helicopter rescue) and to protect the Peregrine Falcons that nest in the cracks high above the bay.

The power plant inside the harbor mouth was built in the early 1950’s and produced electricity first by coal and later by oil. For most of it’s life it was owned by the Pacific Gas & Electric Company, or PG&E, and in 2006 it was sold to Dynegy, Inc. who operated the plant until 2014. Since then it has stood quiet, the paint on the blue-tipped stacks flaking away 450 feet above the town.

I’ve never lived in the town of Morro Bay itself, but never more than a half-hour drive away. In 1993 I was living in Los Osos, a small community just across the bay and one night there was an eerie glow in the sky that I hadn’t seen before. I got in my car and went off to investigate. The light came from behind Morro Rock to the north and the sand dunes separating the bay from the sea to the west. I later learned that the source were boats fishing for squid in the ocean beyond. The intense light shined into the sea and caused squid to come to the surface where they could be harvested.

Both of these photographs were made from Tidelands Park, a small community park at the south end of Morro Bay’s Embarcadero. The green color came from the lights the boats use to attract the squid, and the yellow from incandescent lights of Morro Bay. I made several exposures with my old Nikon EL-2, ranging from a few seconds to several minutes. It’s been a long time, and cameras at the time didn’t record anything but the picture, so I can’t tell you how long the shutter was open or even what lens I used for these photos.

When those photos were made in the 1990’s Morro Bay had a thriving fishing fleet. But shortly afterward production went into serious decline as its most productive fishery collapsed due to poor management and overfishing. In 2003 the fishing industry made an unlikely deal with The Nature Conservancy to use advanced technology and to share their catch data – once considered a trade secret – with scientists and among competing fishing boats. This allowed better decisions on where to fish, where not to fish, and what gear to use. This turned the industry around, became a model for other fishing communities, and has been a great success for both the fishermen and the fish. In 2013 Morro Bay had it’s best fishing year since 1993.

Morro Bay isn’t just for commercial fishing. Many residents and visitors take advantage of the piers and beaches to fish for perch, rockfish, jacksmelt, mackerel ,cabezon, and more. 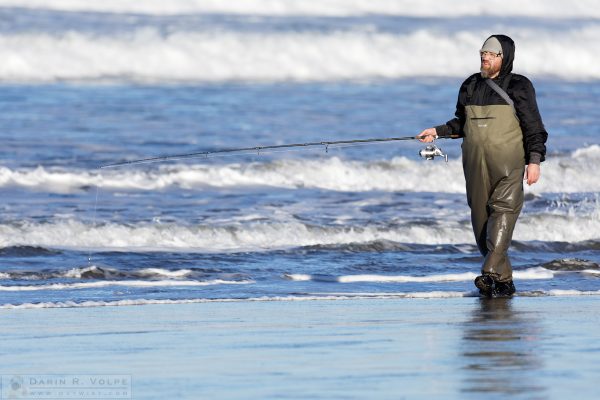 Greeting visitors as then enter town are small blue signs declaring that “Morro Bay is a Bird Sanctuary.” Morro Bay and the surrounding communities are a bird lover’s paradise. According to the National Audubon Society, Morro Bay is one of the most important waterbird stopover and wintering locations south of San Francisco. Each winter the seashore and estuary are teeming with up to 20,000 shorebirds. About 30% of the California coastal population of Western Snowy Plover spends the season on the long beaches of Morro Bay State Park. Hundreds of other species make their way through town during the winter months including curlews, godwits, various ducks, osprey, and more. And that doesn’t even include the year-around residents like herons, pelicans, and the ever-abundant western gulls.

On the north side of Morro Bay is Morro Strand State Beach, which consists of two stretches of sand with a combined length of three miles between Morro Bay and its neighbor to the north, Cayucos. Thousands of shorebirds congregate here through the winter, darting back and forth with the waves in their search for sand crabs and other critters exposed by the receding water. The south beach is where flocks of sanderlings and Western Snowy Plovers cover the sand each winter.

Just south of Morro Strand State Beach is Morro Rock Beach, a stretch of sand that is very popular with families and surfers. That beach continues south to Morro Rock, where a road separates it from the harbor. The Rock is home to  two nesting pairs of Peregrine Falcons. In the 1970s, Morro Rock was one the only nesting sites for the five known pairs left in California. Like many birds, DDT had put them on the endangered species list. They have since made a strong recovery and were taken off the federal list in 1999 and the California list in 2009.  Peregrine Falcons are the fastest animal in the world. These three and a half pound birds spot their prey from high above and can dive at speeds over 240 miles per hour, or 385k/ph.

Past the rock and in the harbor you’ll find the docks where commercial fishing and Coast Guard boats are moored, and where pleasure boats are tied to buoys in the bay. The high masts and lamp posts of the docks make excellent perches for birds like Osprey, where you might find one enjoying a recently caught jacksmelt.

Of course, you can’t have a dock without “seagulls.” There’s actually no such thing as a bird called a “seagull,” these are properly Western Gulls, one of numerous gull species in California. As adults they’ll take on their familiar white and gray plumage and yellow beaks. A black beak and gray feathers is the sign that one is seeing its first ever winter.

As you continue south through town you’ll enter Morro Bay State Park. Morro Bay Golf Course and Black Hill will be on the left and the Natural History Museum on the right. Beyond is a marina, a campground, and finally the Morro Bay Estuary and surrounding land. Its hard to visit this part of the park without seeing flocks of Pelicans and at least one Blue Heron or Great Egret either standing in the channels or flying overhead.

More to See in this Town by the Sea

You’ll find much more in Morro Bay than what I’ve included in my brief description above. Wildlife abounds – the bay is home to sea otters and you are almost certain to see California Sea Lions and perhaps Pacific Harbor Seals in the water as well. If you’re lucky you may even see a jellyfish bloom in the bay. At the water’s edge you’ll find an abundance of crabs, mussels, and of course squirrels looking for a hand out. Off shore you’ll see the plumes of Gray Whales as they migrate south from December through April and if you take a whale-watching tour you might see Humpbacks, Blue Whales, Finback Whales, and Orca or Killer Whales – although Orcas aren’t whales at all and are actually dolphins, which you’ll see in the coastal waters too.

Besides wildlife, Morro Bay is home to a variety of shops and seafood restaurants. It hosts several festivals and events throughout the year including an annual kite festival, a Christmas lighted boat parade, art shows, and more. The tall ships Lady Washington and Hawaiian Chieftain make regular visits and offer tours and sailing excursions.

Morro Bay truly is an enchanting seaside village that holds many wildlife treasures, nature trails, delightful shopping, award-winning restaurants, and more for tourists and locals to delight in.